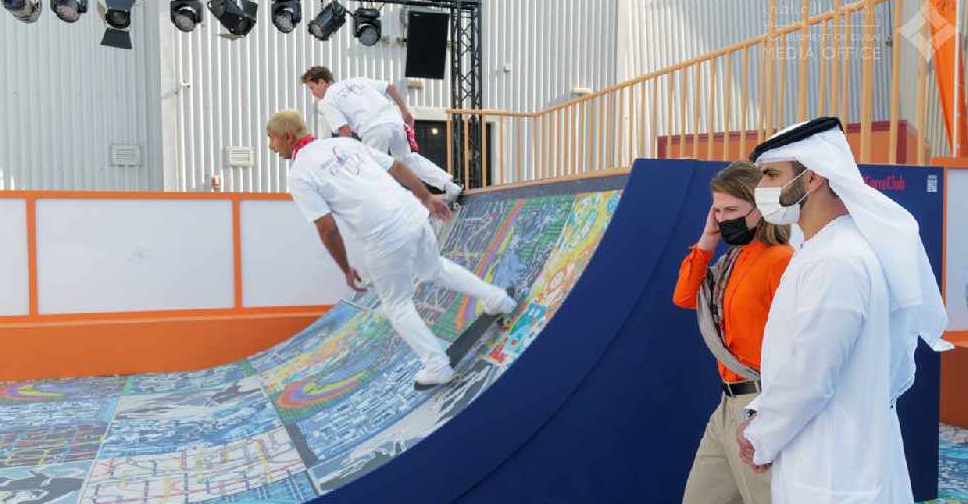 The event, organised by the Dubai Festivals and Retail Establishment (DFRE), in partnership with global luxury fashion house Hermès, is part of the Dubai Shopping Festival (DSF).

His Highness toured the unique exhibition accompanied by Helal Saeed Al Marri, Director General of the Department of Tourism and Commerce Marketing.

The Hermès Carré Club is an interactive and immersive experience that showcases the craftsmanship, creativity and history behind Hermès’ silk scarves.

During his visit, Sheikh Mansoor was briefed on the making of the scarves through a virtual tour streamed live from France.

In the Carré studio, the centrepiece of the event, Hermès artists briefed His Highness about the various design methods and material used for their creations.

The Carré Studio offers visitors an opportunity to meet Hermès artists and watch them work in real time.

The exhibition also features Carré Knot where collectors, enthusiasts and other visitors can learn the art of scarf knotting; and Carré Café which hosts live music and discussions on the theme of design.

. @sheikhmansoor bin Mohammed opens the Hermès Carré Club exhibition, organised by the Dubai Festivals and Retail Establishment DFRE, an agency of @dubaitourism, in partnership with leading global luxury fashion house Hermès, as part of the @DSFsocial at Alserkal Avenue. pic.twitter.com/gN1XPkHF1D