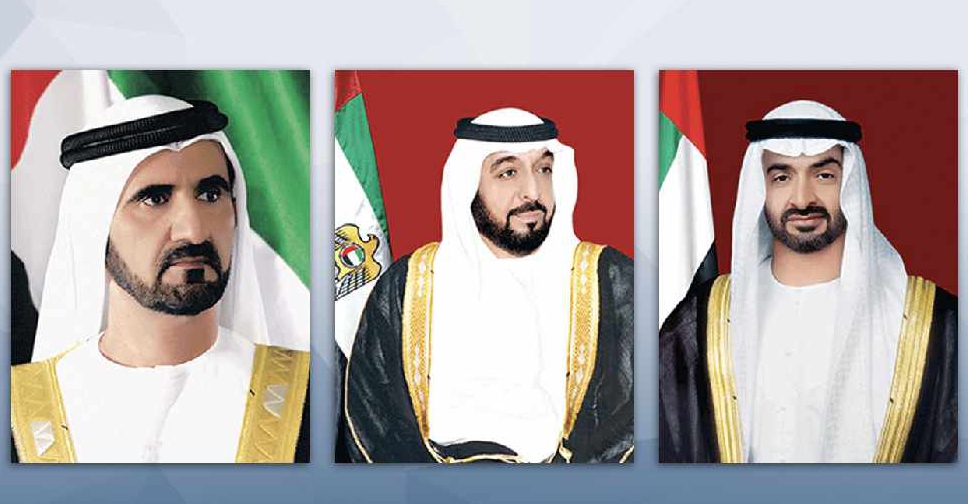 The leaders of the United Arab Emirates have been paying their respects to the nation's heroes ahead of Commemoration Day on November 30.

President His Highness Sheikh Khalifa bin Zayed Al Nahyan pledged to always remember with appreciation and gratitude "our children who sacrificed their lives in the fields of truth and duty, the fields of redemption; in defence of the nation, in preservation of its sovereignty, and in the protection of its achievements".

In a statement to the 'Nation Shield,' the UAE Armed Forces magazine, Sheikh Khalifa added that these sacrifices are "medals of pride" that will adorn "our chests and those of our children and grandchildren".

The President also said the nation's martyrs are like "beacons that illuminate the way, as we create the next 50 years" and renewed his promise that their children and families will remain a priority and will receive the highest care from the state.

His Highness Sheikh Mohammed bin Rashid Al Maktoum, Vice-President and Prime Minister of the UAE and Ruler of Dubai, said that UAE martyrs will remain alive and fresh in the memory of generations to come and in the conscience of the UAE people.

In his statement to the magazine, His Highness stated: "We are confident that their achievements will remain indelible in the annals of history. They are present in every achievement, every success, and every victory we are achieving. They are alive in the conscience of every Emirati, driving them to serve our country with loyalty and devotion."

Sheikh Mohammed added, "The Armed Forces are our solid fortress and shield. Our loyal men have kept their promises by fighting under the Emirati flag and sacrificed their lives to keep it flying high. On this day, our martyrs remind us of the bright Emirati model. Our developmental and humanitarian achievements continue to be recognised and appreciated across global development and competitiveness indexes."

In his statement, His Highness Sheikh Mohamed bin Zayed Al Nahyan, Crown Prince of Abu Dhabi and Deputy Supreme Commander of the UAE Armed Forces, said the martyrs "are like the stars that illuminate our present and future with the noblest values and meanings and urge us to give more for the sake of the homeland".

He said: "They sacrificed their lives in the field of bravery and honour in the UAE and overseas, thus performing the greatest heroism and sacrifices in history...Societies that make sacrifices in defence of their values, principles, dignity and higher interests are the ones that build their present and turn to the future with confidence, and preserve their supreme national interests in a world full of dangers."

His Highness Sheikh Humaid bin Rashid Al Nuaimi, Supreme Council Member and Ruler of Ajman said, "It is a day when the hearts of the people fill with gratitude and pride for the heroism of the UAE martyrs who sacrificed their lives in defence of their homeland."

"Commemoration Day embodies all the principles that the nation is working on consolidating in our society; solidarity and unity, and collective action for the advancement of our nation at various levels," Sheikh Humaid added.

His Highness Sheikh Saud bin Rashid Al Mu'alla, Supreme Council Member and Ruler of Umm Al Quwain, said that the leadership and people of the UAE "will always remember the nation’s brave martyrs in tribute for their ultimate sacrifices in defence of its soil, security and stability."

''Let our martyrs remain at the forefront of the pages of national history, and in our hearts, while we draw from them examples of courage to elevate the dear nation and make sacrifices,'' Sheikh Saud said in a statement to 'Nation Shield'.

In addition, His Highness Sheikh Saud bin Saqr Al Qasimi, Supreme Council Member and Ruler of Ras Al Khaimah, stated that Commemoration Day is a day when everyone celebrates the noble values of patriotism and obligation to the nation and remembers the sacrifices of the country’s heroes.

His Highness affirmed that "we reiterate the commitment of the UAE’s leadership and people to the martyrs’ families, in recognition of their sacrifices that will always be a shining light in the history of the UAE, as well as in gratitude for their sacrifices, principles and ethics and their values of unlimited giving. Thanks to these values and sacrifices, the Emirati flag will always fly high in the sky.

"I single out the mothers of martyrs, who sacrificed their children for the supreme interests of their nation."

In his statement, His Highness Sheikh Hamad bin Mohammed Al Sharqi, Supreme Council Member and Ruler of Fujairah said, "Countries are only built by their citizens, and nations only rise through the sacrifices of their peoples."

"We salute those who kept their promises [on the battlefield] and sacrificed their lives for the peace and security of our country," Sheikh Hamad added while paying homage to the nation’s martyrs.

"The sacrifices of our martyrs will remain engraved in our memory and the memory of next generations," Sheikh Hamdan said in a statement given to 'Nation Shield'.

He added that the nation's martyrs are like the stars that illuminate our present and future.

.@HamdanMohammed: The sacrifices of our martyrs will remain engraved in our memory and the memory of next generations.

Statement from the Crown Prince of #Dubai on the occasion of #UAE Commemoration Day, marked on November 30 every year: https://t.co/ir8kJ2WQqC pic.twitter.com/PUBuM9h3m7